At Purity Coffee® we make every decision based on health first. We use the latest scientific research to optimize how we source, test, roast and deliver our coffees.

We begin with these fundamental baseline standards from which we develop additional standards as the science presents new information. 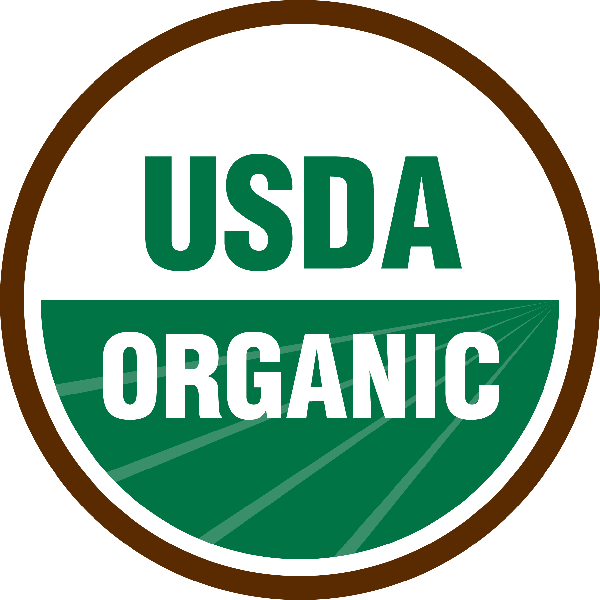 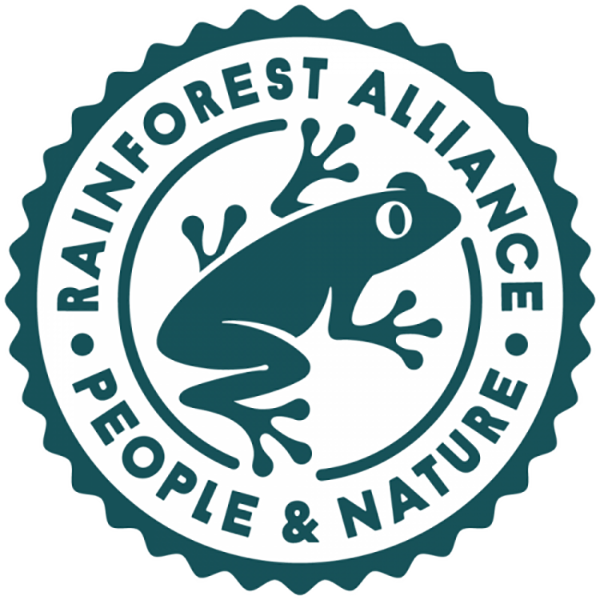 At Purity Coffee, we continue looking for the best coffees and researching ways to make our coffee healthier. We want consumers to have more choices in coffee to meet their health goals. The deeper we go, the more we understand that coffee is extremely complex, and various beneficial compounds can be created and destroyed at different roast levels.

Purity EASE is our “dark roast”.

It is not roasted so dark as to produce unhealthy levels of PAH, because we take the coffee out before it reaches the temperature cited in the scientific literature where PAH begins to form rapidly. Our dark roast follows a profile laid out in the scientific literature and hits several points that have been proven to be critical. Generally, throughout the literature, dark roast appears to be an appropriate choice for individuals with digestive issues and seems to have positive effects on the brain.

When comparing Purity Dark Roast to Purity Original, here are a few points to consider:

There are many ways roasters describe a coffee's color, and most terms are not precise, but rather suggestive.

Purity FLOW is a medium roast, which is a bit darker than the industry's sample roast level to evaluate (or "cup") specialty coffee. Purity EASE is darker than medium, and what some might say is a "Full City" roast. It is not as dark as what many consider Italian or French roast. 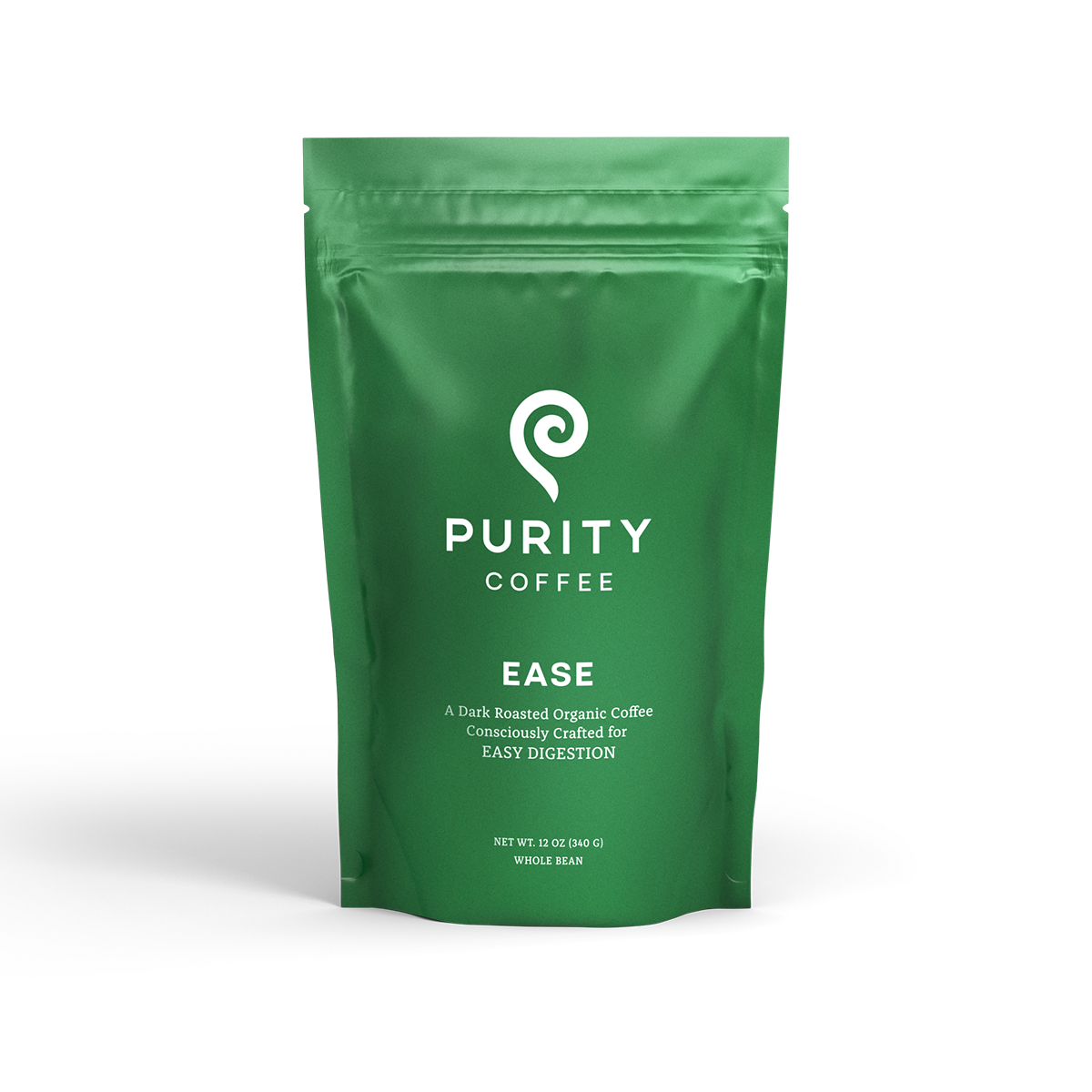 Purity EASE is formulated for:

The key beneficial compounds for a healthy dark roast coffee:

Melanoidins are what make coffee (and other foods) brown when roasted, baked or toasted. They are formed during the Maillard reaction, when certain sugars and amino acids combine at high temperatures and low water activity. They may be considered bioactive compounds (Bekedam et. al. 2008). The extent of roasting-induced antioxidant formation is directly linked to the extent of melanoidin formation, and the longer we roast, the more intermediate and high-molecular-weight melanoidins are produced. The following impacts/actions are associated with melanoidins: Antioxidant activity, metal-chelating, antibacterial, and prebiotic functionality.

Coffee melanoidins do not seem to be absorbed in humans, but they can function as an antioxidant dietary fiber with an overall antioxidant capacity via embedded low molecular compounds. Melanoidins can act like a ‘sponge’ for free radicals in the gut. This improves the reduced/oxidized glutathione balance in the colon. Glutathione is an antioxidant produced in our cells (Garsetti 2000).

There are additional benefits of coffee melanoidins in the gut: They may promote the growth of a beneficial colon microbiota, affecting inflammatory pathways in the colon and the liver (Sales et al. 2019). Oddly, antioxidative structures formed in coffee melanoidins are similar to vitamin E. These appear to activate their scavenging properties gradually (Bekedam et al. 2008).

Finally, coffee melanoidins seem to have a protective effect on liver steatosis in obese rats, which suggests that the melanoidins in coffee may influence liver fat and functionality. Glutathione may be involved (Vitaglione et al. 2012).

CGL exhibit opiate receptor binding activity with characteristics like those of opiate antagonists and can reverse morphine-induced analgesia in mice. However, acute pharmacologic effects are unlikely with normal coffee consumption. Like chlorogenic acids, these compounds are partly absorbed (Farah & de Paula 2018).

After contact with the alkaline pH of human digestive fluids, part of the lactone was converted into caffeoylquinic acids part. Therefore, it is likely that a large proportion of these lactones consumed in the brew return to their respective chlorogenic acid forms during digestion, indirectly increasing the total chlorogenic acids intake (Farah 2013).

It has been found in a mouse model that the major chlorogenic acid affects spontaneous locomotor activity, suggesting that it or a derivative could pass the blood-brain barrier. The chlorogenic acid lactones are less polar than their parent compounds and should be more permeable to the blood-brain barrier (De Paulis et al. 2004). One study showed a significant correlation between the levels of chlorogenic acid lactones in coffee and neuron cell survival. This suggests that chlorogenic lactones might contribute to the increased protective effects against H2O2-induced death of neuron cells (Chu et al. 2009).

Roasted coffee is the major known food source of norharman and harman β-carbolines. Considered mostly neuroactive substances, β-carbolines show a wide spectrum of reported pharmacological and neuroactive actions. They can bind to receptors in the brain, including opiate receptors, and they frequently act as inhibitors to regulate neurotransmitters. So far only norharman and harman β-carbolines have been reported in coffee (any reference in this review to β-carbolines refers to only these two). Their health effects are being extensively studied. The following impacts/actions are associated with β-carbolines: Antioxidant activity, possible anti-opioid activity, hypoglycemic, and antidepressant. Reduced rate of development of Parkinson’s disease (Ascherio 2004).

Norharman and harman are potent competitive and reversible monoamine oxidase (MAO) inhibitors, in both rats and humans. The high amounts of these β-carbolines in roasted coffee place them among those at the top of the list for compounds with probable influence on Parkinson’s disease course (Casal 2015)

Trigonelline is a plant hormone, one of the more abundant sources of nitrogen in green coffee, and a product of niacin metabolism. Green coffees contain about 1% trigonelline, of which 50-80% is degraded upon roasting; it breaks down to niacin or nicotinic acid and N-methylpyridinium at higher temperatures, and also into volatiles such as pyridine and pyrazines. The following impacts/actions are associated with trigonelline: Antioxidant activity, anti-tumorigenic, anticarcinogenic, anti-cariogenic, antimicrobial, hypoglycemic, and hypocholesterolemic.

Niacin (nicotinic acid) is essential for specific oxidation–reduction reactions in the body. At dark roast levels trigonelline converts to higher niacin levels. This niacin is highly bioavailable in the coffee beverage (Trugo 2003).

The content of trigonelline decreases continuously throughout roasting, while nicotinic acid and N-methylpyridinium increase, with N-methylpyridinium being the major thermal product up to the dark-medium roast, similar to the Purity Dark Roast.

Trigonelline plus chlorogenic acids reduced early glucose and insulin response, which was shown to help prevent type 2 diabetes (Viera 2019). Trigonelline plus nicotinic acid helps regulation of liver enzymes, which is closely related to the suppression of triglyceride accumulation, as well as the progression of diabetes.

Trigonelline acts on up-regulating antioxidant enzyme activities and decreasing lipid peroxidation in the pancreas (Verzelloni 2010). Lipid peroxidation is generally described as a process under which oxidants such as free radicals attack lipids, especially polyunsaturated fatty acids.

Although it is in lower concentrations than CGA, N-methylpyridinium the following impacts/actions are associated with N-methylpyridinium: Antioxidant activity, lower stimulatory effect on gastric acid secretions, possibly assists in weight control, anticarcinogenic (possibly with colon cancer), and DNA protective effects.

CGA and N-methylpyridinium were identified as inducers of Nrf2, considered the master regulator of oxidative stress. Nrf2 represents one of the main cell defense mechanisms and major regulators of cell survival. N-methylpyridinium represented an even more potent extract in vitro and in vivo than CGA (Boettler 2011).

N-methylpyridinium demonstrated an increase in activity in the liver, catalyzing the detoxification of numerous genotoxic carcinogens. In addition, a notable increase in the antioxidant activity of plasma was detected in experiments, indicating that N-methylpyridinium may contribute substantially to the properties of coffee against reactive oxygen species (ROS) (Al-Serori 2019). ROS are free radicals, or unstable molecules that contain oxygen and easily react with other molecules in a cell. A buildup of reactive oxygen species in cells may cause damage to DNA, RNA, and proteins, and may cause cell death (Ref: https://www.cancer.gov/).

Click the links below to view the lab results for EASE. Results are based upon 15g of roasted & ground coffee, which is equal to the recommended amount used for brewing one 8 oz cup of coffee.

EASE: Nutrients & CGA
EASE: Contaminants
See how EASE compares to our other coffees

Citations and Studies Which Support Our Views